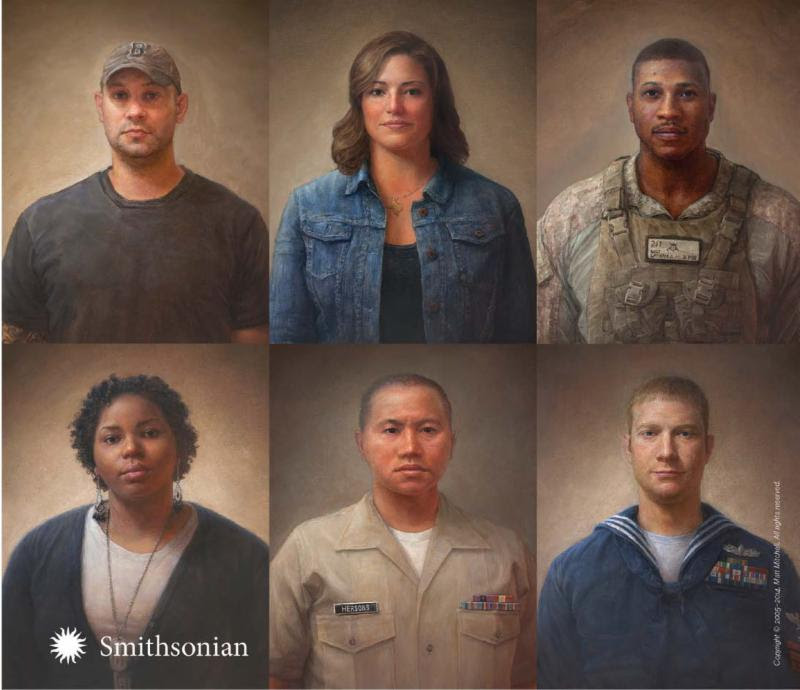 Through the eyes of soldiers and citizens who participated in the Iraq and Afghanistan theaters, 100 Faces of War gives voice to the one percent of Americans that volunteer to defend the 99 percent. Featuring 100 portraits of Americans from every state, the District of Columbia and Puerto Rico, the subjects represent a cross section of those who served, and reflect a variety of military branches, job descriptions, and personal backgrounds. Each oil painting is coupled with a personal statement from the participant to create the portrait.  In 2005, Massachusetts artist Matt Mitchell felt disconnected from recent war conflicts, had no connection to the military, and knew no one who served. Deeply inspired and moved by an article in a local newspaper about an Iraq veteran, Jeffrey Lucey, coming home, Mitchell decided to learn more about the American experience of war in Iraq and Afghanistan. He contacted the veteran’s parents, and Jeffrey Lucey became the first individual he painted for 100 Faces of War. Lucey’s portrait, along with portraits of 99 others who served, are featured in the exhibition. The portraits pay homage to these individuals, visually conveying the impact of their war experience either as civilian support staff or member of the military. Each person met with Mitchell, and was asked to say something about himself or herself. What they wear in their portrait is of their choosing, and they could say whatever they wanted. The statement they provided, and the information in their biography, represent that particular moment in their personal history. Ten posthumous portraits are included in the 100 Faces project. For these portraits, the families provided the words that accompany the paintings. Each unedited statement—ranging from humorous to dramatic, from lighthearted to poignant—candidly reveal the truth of war’s lasting effects. 100 Faces of War recognizes those who serve in our military and acknowledges the incredibly complex and varied American experiences of these wars.